PEIVDF began its missions at the Wildlife Waystation in Sylmar, CA. The quality of the operatories and level of care given to their animals made them the perfect candidate for PEIVDF’s veterinary dental services. The variety of animal breeds residing at the facility also provide a very varied hands-on curriculum for our Tuition for Missions students.

To learn more about this wonderful sanctuary, please visit their website:  www.wildlifewaystation.org

In April 2018, PEIVDF returned to the Wildlife Waystation in Sylmar, California for its eighth teaching mission to the facility. During the one-day mission, PEIVDF provided advanced veterinary care to two residents: a lion and a bear.

In October 2015, PEIVDF returned to the Wildlife Waystation in Sylmar, California for its seventh teaching mission to the facility. During the two-day mission, PEIVDF provided advanced veterinary care to another seven residents of the sanctuary, including (3) tigers, (2) primates, a camel, and a hyena.

In November 2009, PEIVDF returned to the Wildlife Waystation in Sylmar, California. Holding its fourth teaching mission to the facility, PEIVDF provided life-improving advanced veterinary care to eight residents of the sanctuary. Three veterinarians, one dentist, and one veterinary technician joined PEIVDF instructors and board members as student practitioners – all past PEIVDF Tuition for Missions alumni.

Ms. Montana is a sweet, 14 year old American Grizzly bear, who has resided at the facility since 1995, having been orphaned at only 9 months of age during a cold Montana winter. Ms. Montana shares a large enclosure with her sister, Miss America, equipped with a bear den, swimming pool, and plenty of toys.

During the November mission, Ms. Montana needed 6 root canals and one extraction. Sneaking too many sweets behind her keeper’s back, maybe!

To read more about Ms. Montana, click HERE to be taken to her profile on the Wildlife Waystation website. 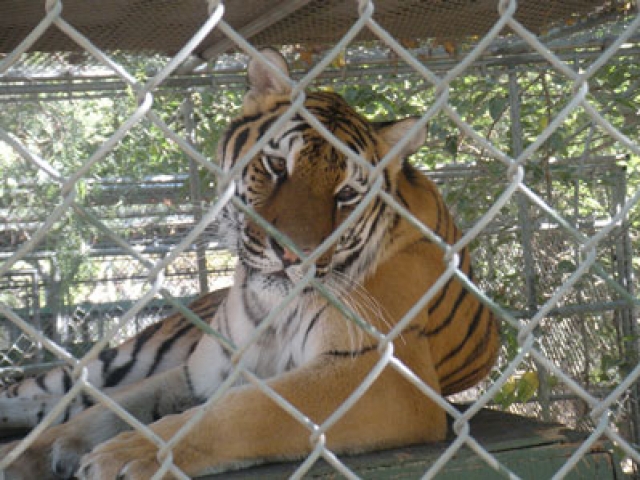 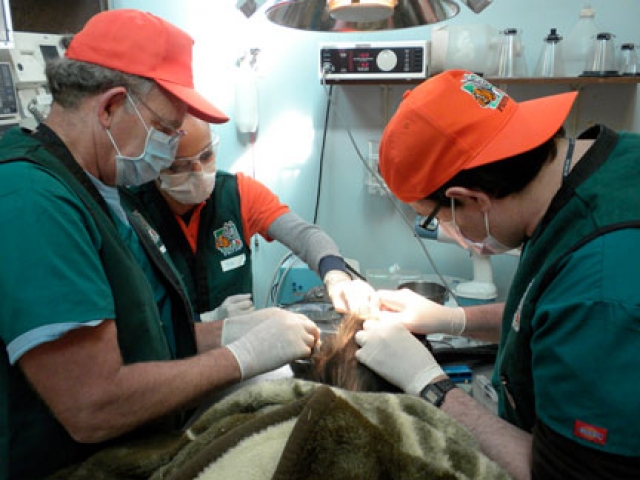 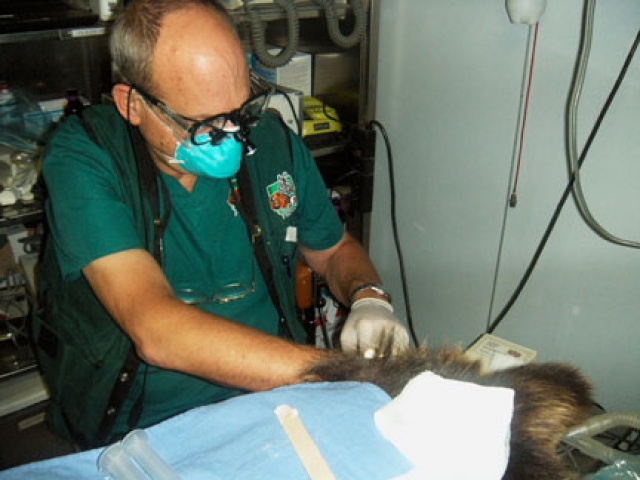 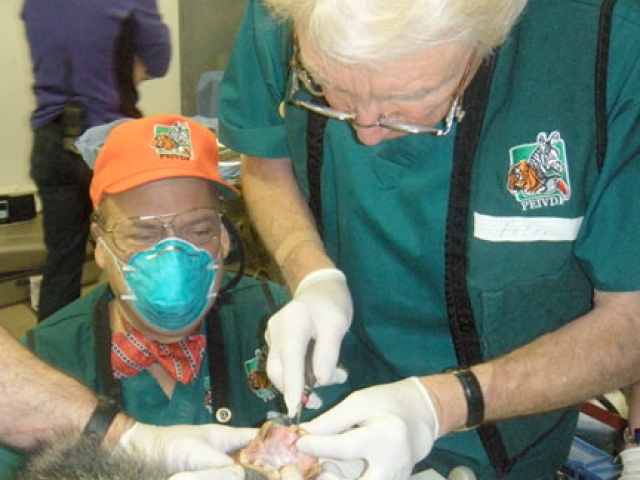 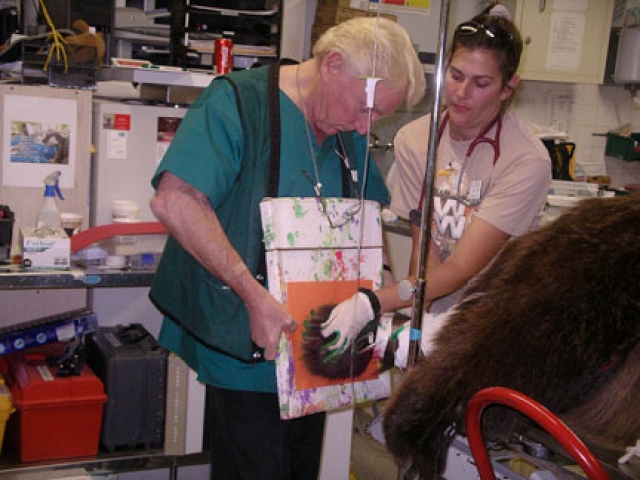 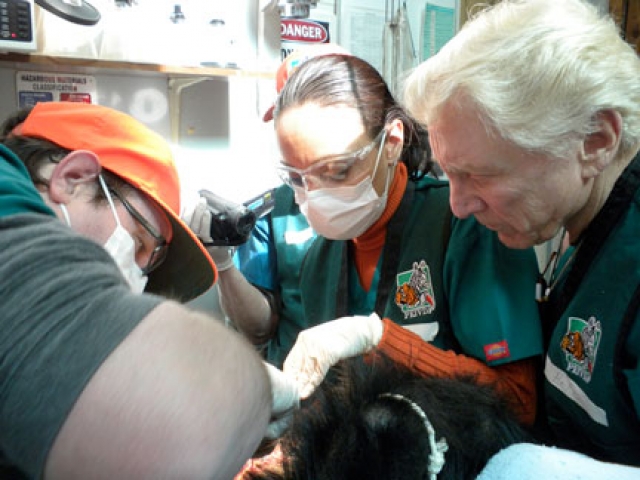 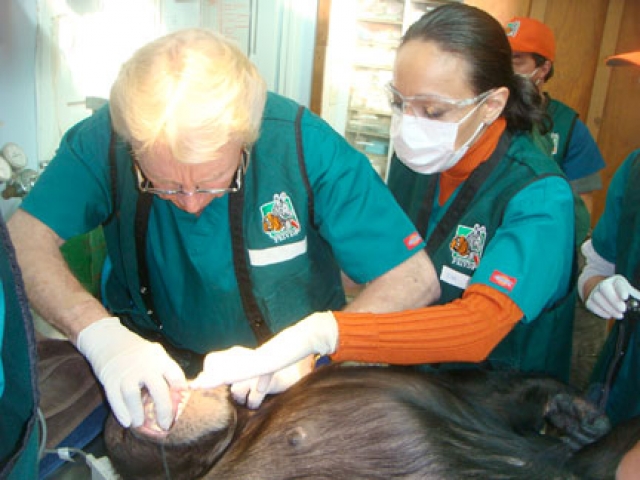 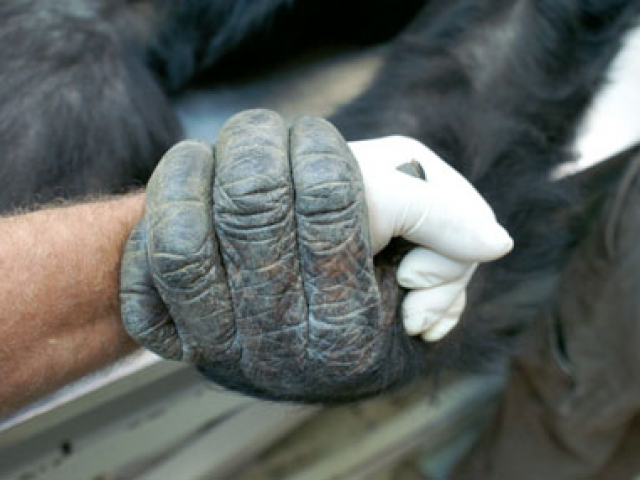 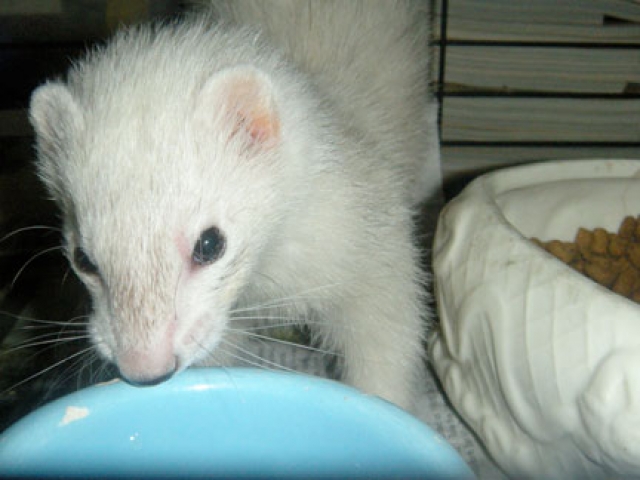 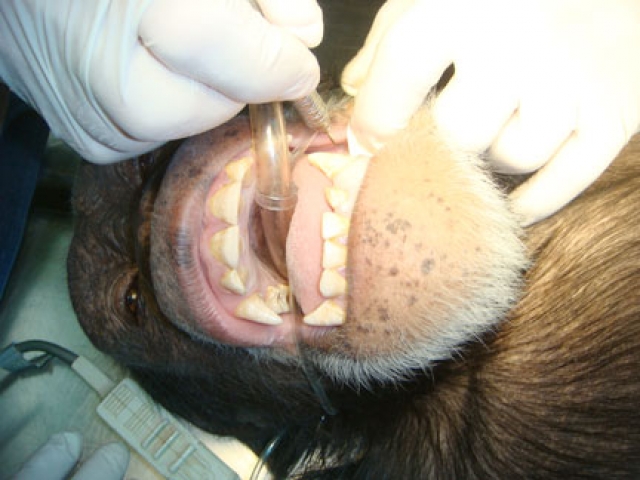 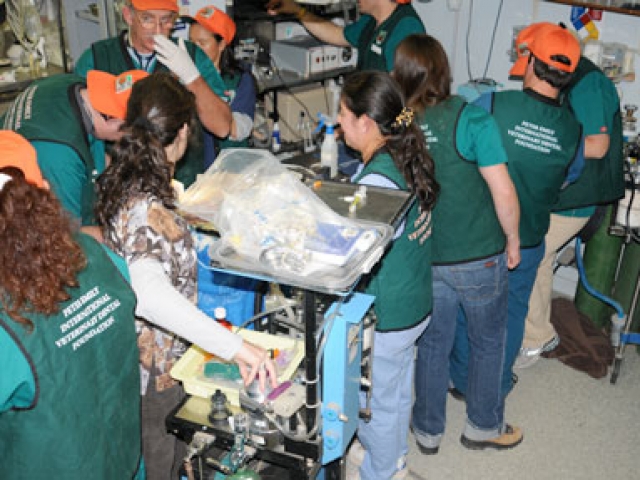 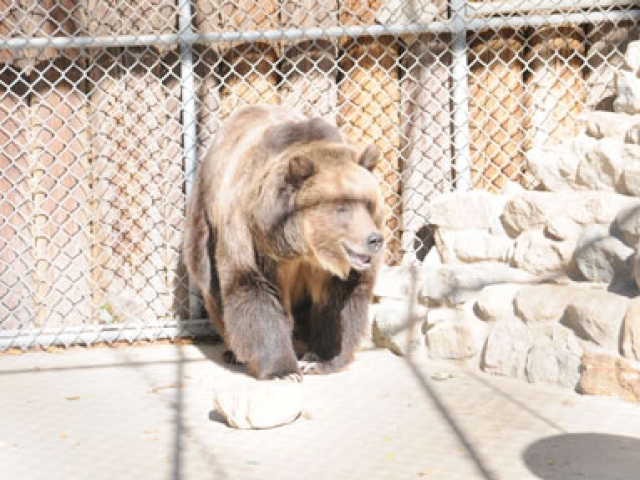 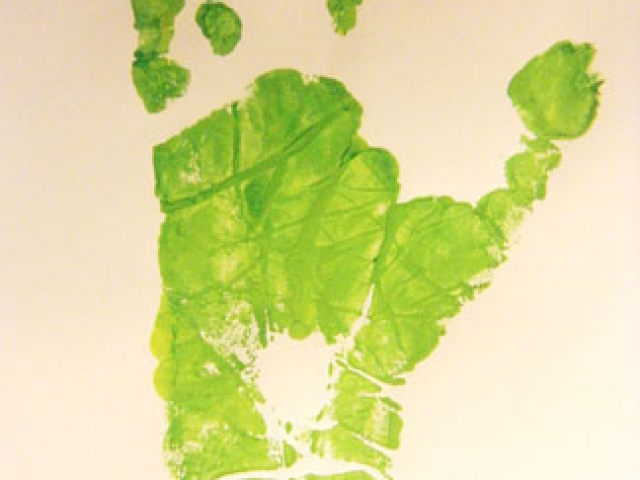 Mission: March 22-23, 2009
PEIVDF returned for a third mission to the Wildlife Waystation in March 2009 to work on some new cases. Four veterinarians, one DDS, and two vet techs joined PEIVDF Board members as mission workers. There were a total of 7 animals requiring treatment: one tiger, one lion, a puma, two wolves, and two bears. An inconvenient hailstorm made life interesting for Wildlife Waystation staff and PEIVDF mission workers, but despite all attempts by the weather to throw a monkey wrench into the weekend, the mission went very well. 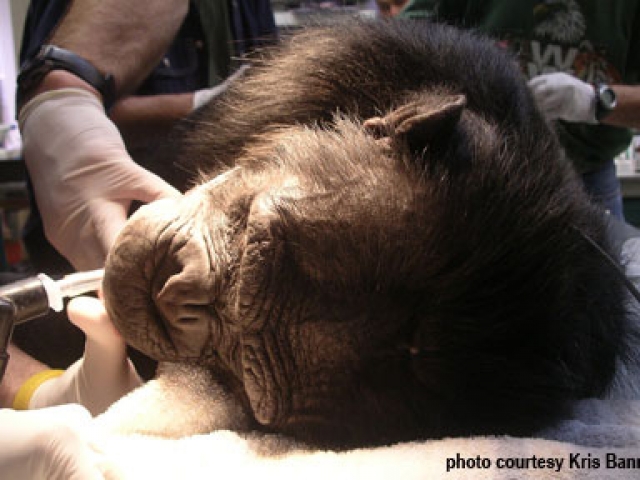 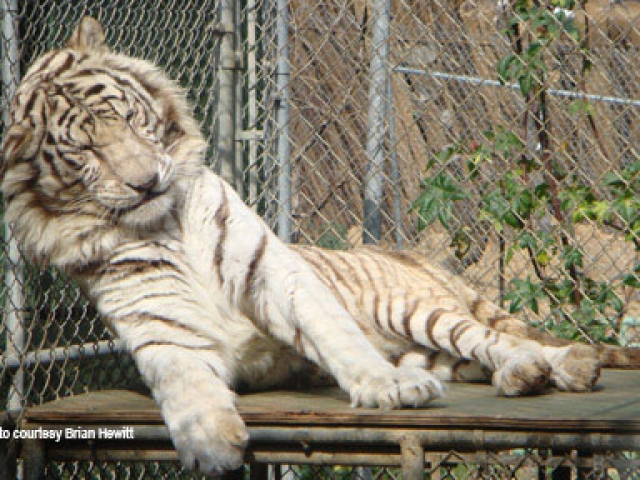 Mission: November 8-9, 2008
PEIVDF initially visited the Wildlife Waystation in Sylmar, California in May 2008, on an “unofficial” exploratory mission. The foundation returned in November 2008 to follow up on some previous cases and to work on some new ones, as well. There were a total of 15 animals requiring treatment: two tigers, five lions, a leopard, puma, wolf, and two bears, as well as one bobcat, a hyena and Chuckles the chimpanzee. Needless to say, it was a busy weekend. The first three Tuition for Mission workers joined PEIVDF board members Dr. Peter Emily and Dr. Steven Holmstrom and his dedicated staff of veterinarians and assistants, as well as Clarence Sitzman, DVM and Carol Breslin, DVM, both PEIVDF friends and volunteers. Tuition for Mission worker Kris Bannon, DVM from Santa Fe is a veterinary dentist from Santa Fe (www.vetdentistrynm.com). Christina Barbier, DVM is an associate veterinarian with Dessert Inn Animal Hospital in Las Vegas, NV. And Tina Brandon-Walters, DDS is a “human” dentist with a practice in Las Vegas, NV (www.brandonfamilydental.com). 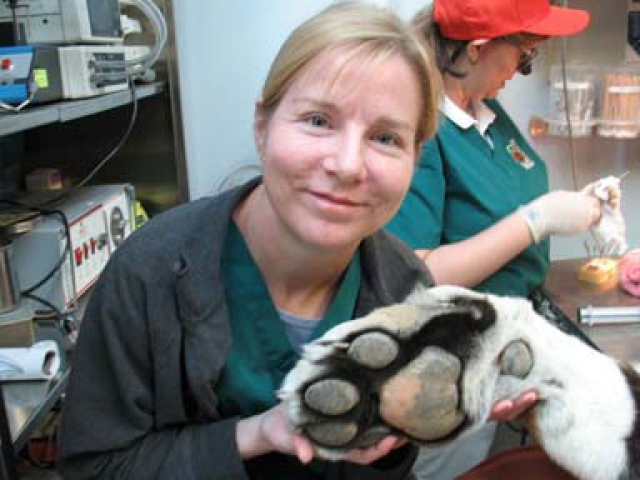 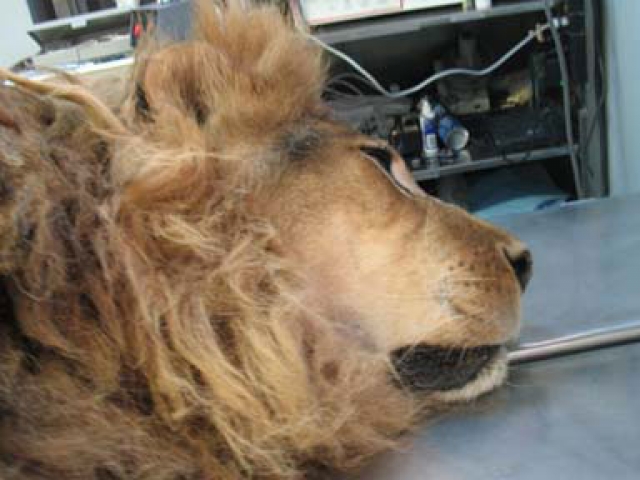 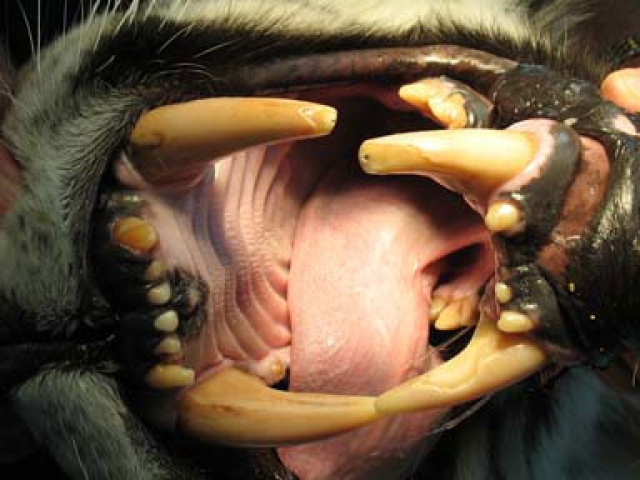